Audio Light Systems at ONE in Suffolk 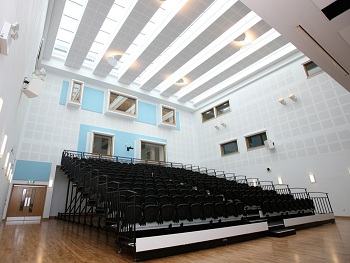 Continuing Audio Light Systems involvement in the education sector, we have recently completed the installation of a drama theatre and recording studios at the new build school, Suffolk One, for 16 to 19 year olds.

There are two sound systems in the drama theatre. One system covers the audience space using 4 Turbosound TCX-15 speakers powered from QSC PLX amplifiers. Audio routing is done via an Allen and Heath iDR8 digital signal processor. The second sound system covers the stage area which can be split into two areas. These rooms have a portable flight cased trolley each, used to put audio into either one or both rooms via Australian Monitor XRS12 speakers.

The lighting system is made up of 8 internally wired lighting bars, 4 Strand 6 Pack dimmers with 15A sockets which when used in conjunction with the cable patch, allows any of the circuits on the lighting bars to be quickly and easily patched onto a dimmerchannel.

The lighting system has two lighting consoles, a Zero 88 Jester in one of the portable trolleys and the main theatres ETC Element 40. This allows the lighting to be independent in each room. These consoles can plug into anyone of the facility panels.

Audio Light Systems also installed three projectors. One Christie Digital LX1500 projector is used in the audience area and projects onto a 4m electric screen. A further two Christie Digital LX400 projectors are mounted in the stage area. These can be used independently in each of the two stage areas or be setup to work together to produce a projected backdrop on the cyclorama. 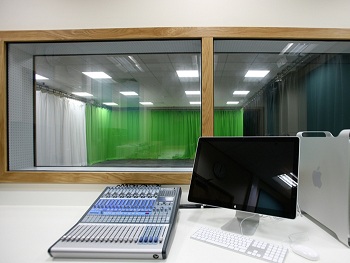 The whole system can be controlled via a Crestron AV2 control system with two TPs-6L touch panels. One touch panel is mounted in the equipment rack while the second is mounted in a JM Lecterns PA15 lectern, also containing a Sennheiser G3 radio microphone and Denon DVD player.

The two recording studios are linked back a control room containing two PreSonus Studio Live desks and Genelec 8030A Studio Monitor speakers. Facility panels and patch panels allow the studios to share feeds as well as send and receive feeds from the drama theatre.