Wick Assembly Rooms was experiencing problems with a out dated poorly designed audio system, coupled with a tired looking drape set and walk along curtains.

The Audio Light Systems engineers on site constructed a simple steel framework above the ceiling. Three wire rope where suspended from the frame through the ceiling and connected to a pair of EAW- MK series loudspeakers.

The integrated system incorporated two paralleled 16-4 stage boxes with access points to the speakers and DMX lines for the dimmer control. One on stage and the second at the rear of the auditorium.

A portable audio system was supplied that can be used in either stage or rear of auditorium position. A long umbilical cable allows flexible positioning for the mixer desk and amps depending on the layout of the room. 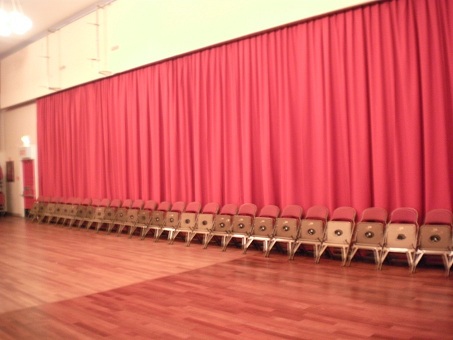 Drapes and curtains
The Stage required a new set of drapes, legs and Borders to replace the old ripped and thread bare existing set. Doughty six-track is now installed with a pulley system for the main curtains. The side wall of the Auditorium received a new set of blackout curtains in a striking cherry red to add colour to the room.