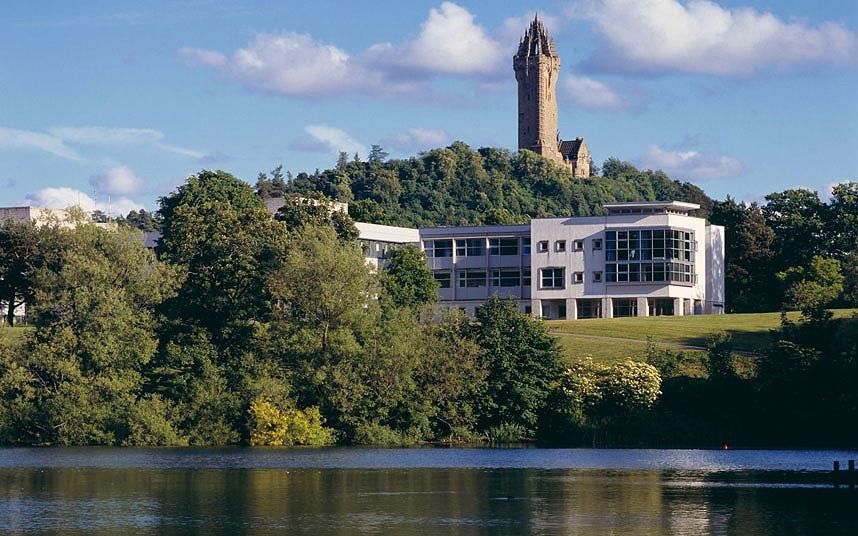 The University of Stirling choose Audio Light Systems as part of the refurbishment contractors for their main theatre. The Logie Lecture Theatre continues the universities drive to provide a high standard of teaching facility. To that end Audio Light Systems installed a Crestron control system giving the lecturer simple control of the theatres equipment whilst also allowing more control to the universities audio visual technicians. 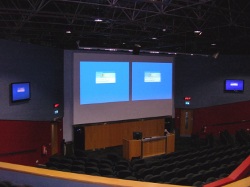 The theatre boosts three Mitsubishi HD projectors suspended on an electrically operated Crestron controlled hoist, allowing quick and easy access for maintenance. The projectors project onto a 7m x 4m perforated fixed screen, giving the user the option of either single or dual projection. The theatre also has a Blu-Ray player connected via HDMI to the projector giving the theatre the ability to show High Definition video.

The DDA compliant electrically operated lectern holds the “popups” for laptop connections as well as the Smart DT-770 interactive touch screen, document camera and a pair of Sennheiser gooseneck microphones.

The audio system in setup using an Allen & Heath iDR8 with input and output expanders, switching between lecture mode and cinema mode at the touch of a button on the touch panel. The theatre also has Sennheiser G3 radio microphones giving the theatre the flexibility for audience question and answer sessions. Willaims Sound inra red transmitters provide hearing assistance.

The video signal distribution is via a Crestron CEN-RGB8x8 RGB Switcher. This allowed easy interface with the Crestron AV2 control processor. The signals are sent over cat5e using Kramer TP-121 and TP-122 range extenders.

The Crestron system can also control the main theatre lighting, wall lights and the blue lights behind the screen as well as the foyer lights. 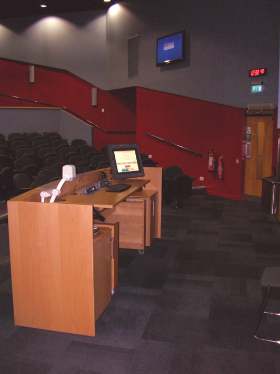 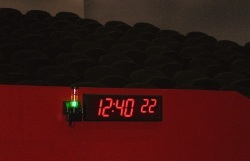 Although the main use of the theatre is lecturing for students, the theatre can also be used by commercial organisations. To this end the theatre has three NTP time server clocks and a traffic light cue system allowing accurate timing and conference speaker cueing. 50″ LCD screens in the theatre and 46″ in the foyer allow logos or information to be displayed independent of what is on the main projection screen.